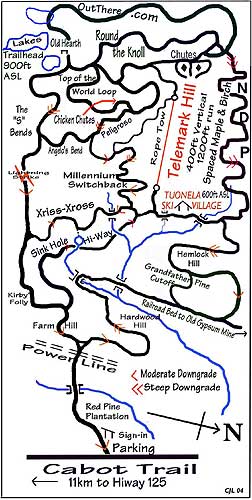 The “Tuonela Trail”, founded in 1997, boasts the maritime’s only serviced Telemark hill. Located in the snow belt of Cape Breton, it was discovered in the late 80’s by two avid backcountry skiers, Chris and Tim. It has been developed over the last ten years, with help from local skiers. 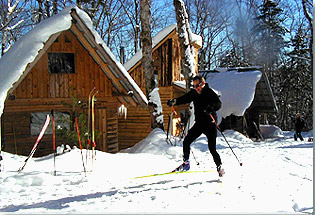 The Telemark Hill with an elevation of 900ASL, has a 1400ft run over a 400ft vertical. There are steep black diamond chutes at the top followed by a majestic run through a spaced maple and birch forest. Access to the top of the Telly Hill is by the groomed trail, snowshoes or climbing skins when the Telemark Hill is open. The 25km of x-country trails are groomed on a regular basis. Designed mainly for classic technique, some are wide enough to permit skating.

The “Millenium Trail”, with its 9 ungroomed switchback bends from the “Peligroso Loop” to the “Xriss-Xross” is a challenge for skiers of any level. “Xriss-Xross” for the 2006 season was totally redesigned and runs along ridges beetween sink holes. Along with its spectacular views of St. Ann’s Bay the “Top of the World” loop leads to the top of the Telemark Hill and accesses the “NDP” trail, the ultimate in black diamond fun. It is a groomed trail with steep sections, hairpin bends, and brings you right back into the Village. “OutThere.com” which leads from “The Hearth” back to “Round the Knoll”, was cut in 2005 and is on the top of the highlands plateau. New for 2008 is the “Manchester Loop” which is an easy 1 km warm-up loop to & from the Village.. Whatever level of skier you are, we have something for you. 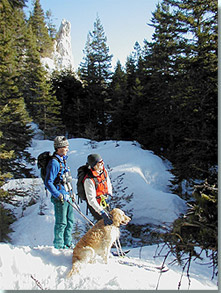 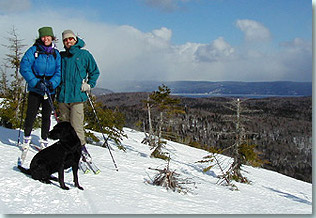 Telemark Skis and boots are available at the Lodge for rent.
LEAVE YOUR SKIS AT THE LODGE AND RENT SOME TELLY GEAR TO FULLY APPRECIATE THE MOUNTAIN

Tim or Chris, CANSI certified Telemark Instructors are ready to give you some pointers on both Telemark & X-Country skiing to help you improve your skills.
Experienced Telemarkers will certainly enjoy the challange of the glades.